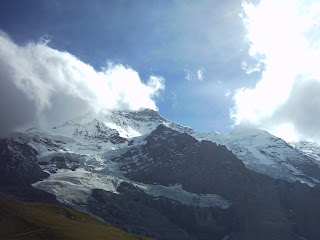 Posted by erwinlux No comments:

Diary entry 26 April 2008:
Recapitulation of my ideas about god: What monotheists refer to as “God” is — to me — universal consciousness, the cosmos as a whole, the “sum” of all consciousness. God is in everything and everything is god. We humans are the highest level of consciousness on this planet earth — as far as we know — and we represent the highest level of the evolution of god here. On our small “island” in the cosmos god evolves through us, changes through us. If our “island” the earth is unique in this sense, then we humans are the spearhead of the evolution of god itself. God is not in any way greater than the cosmos and did not “create” it, and cannot exist separately from this cosmos. In fact, if we are unique — which seems unlikely if the cosmos is as we perceive it (see my post below: “the universe and us”), though certainly not impossible — then god is dependent on us to a great extent.

If the cosmos itself “emerged” in some way through a Big Bang or something like it, then god was the internal essence that “emerged” with it, as did what we know as the laws of nature. The cosmos was not “created” based on any design but emerged and evolved through a process of trial and error, “guided” by god’s evolving intelligence based on the organization of memory. The emergence of life on earth and its evolution was also “guided” in this way by god. Humankind is a product of this evolution, taking consciousness to the highest level known so far on earth.
I believe god inspired man to create religions, spiritual teachings, etc., because it wanted to find a way to guide or even control humankind.

(More on 29 April 2008): This is also the reason why humans and just about everything else tends toward forming hierarchies and pecking orders. God needs hierarchical organization in order to be able to exploit and control “created” beings. And what we have come to regard as “good” and “evil” are just different ways of looking at things from the larger perspective of god. God has traditionally favored the strong, the top of any pecking order hierarchy, because he draws the greatest pleasure from that type of organization of both living beings and inanimate reflections of his consciousness. Is god, then, like a human in his feelings and behavior? I say, absolutely, yes: at least on this earth, our tiny part of the cosmos (=>”the universe and us” below), god cannot be otherwise, because we are this way — we reflect god’s nature and god is no greater than us as a collective, and no better.
More to come …

There is no “absolute,” no “perfection”

November 2007 diary entry: I continue to believe that we — humankind — must outgrow religion and all of the things that have divided us in such a way as to lead to war. All of our religions, which have been the foundations of civilizations, have tended to divide us because they have led us to use force against each other in the name of a god or gods. There are always “chosen” ones, favorites, or the “good” in religion as opposed to the others, the “bad” or “evil.” I do believe in an ideal of “goodness,” which we have been developing. There is no absolute “good.” There is no absolute anything at all. We are striving towards a goal that can never be reached — but which is nonetheless a worthy goal. Our understanding of this goal, this imaginary and forever unreachable “absolute” goodness, is evolving, and so is our ability to put this understanding into practice. But we must come to realize that the universal consciousness, the fundamental essence of the cosmos that we like to call “God,” is in itself neither good nor evil, and cannot move our world towards goodness without our help. — We have to begin by thinking and feeling as “we,” “us,” including all humankind; and beyond that all living beings, to a lesser extent.

Some clarifications: My answers to questions from a friend about my view of "God"
...


It is still difficult for anyone to imagine that god is just as “evil” as he is “good.” I think that is the case. My point is that god has encouraged both in humankind and has enjoyed setting one against the other, using hierarchies to form opposing groups centered on rival leaders. But god evolves and changes through us, as I have emphasized. And despite appearances to the contrary I believe we are very slowly moving towards a better world with less conflict and violence. Perhaps I am naïve, but I am quite sure that god cannot change the world to good. We can. There is no hope for us if we do not believe in humankind. God and the natural world has no meaning without us or some beings like us — it might as well not exist at all.
...


I don’t believe there is a satan. God is satan, too. My post here is not finished, so I need to explain a lot more. But you can find some relevant explanations in my older posts below, including “the end of religion,” “the universe and us,” "thoughts about god” and “blasphemous ideas…,” and even “my first serious doubts about god” at the bottom of the page. This last one, dated 1994, is the oldest post here about my view of god but it gives you some idea of where I am coming from and how my ideas have evolved since 1994. If you read all of those starting from the bottom, I think you get a pretty good picture of where I stand.
...
By hierarchies I mean hierarchical-type organization as such, and what is known as “pecking orders” in particular — where the strong, wily (cunning) and/or violent generally dominate the weak. It is dominance by one or a few over others — especially systematic dominance. But it also includes implicit hierarchies where, for example, many people follow a spiritual leader (say, Jesus), who then dominates not by force but by love (if you can use that word in this sense) or the power of inspiration. God encompasses both great beauty, goodness and gentleness as well as their counterparts ugliness, evil and violence — just like we do. It is not that I am making god seem human but rather that I believe we humans are simply a full reflection of god: here on earth we represent the spearhead of god’s evolution, the highest point of consciousness that god itself (or him/herself) has reached. God cannot be different from us here - that is, from humankind as a whole.


We have been cheated, in a way. We have been living with a big lie: God. But we have willingly participated. The lie is our lie, too. We have been happy to be deceived by God, because it is comforting to believe in a great supernatural power that is on the “good” side – which is always our side, because no one believes they are bad. Even the worst criminals and mass murderers believe they are “good.”  They may admit mistakes – like most everybody does – but they always believe they are fundamentally “good.” However, the “good” can really exist only if there is also an opposing “evil.” We do believe in an “evil” but it is always someone else – just like God wants us to see “evil” as something entirely separate from him.
Yes, we are all part of this deception or self-deception. We participate willingly, most of the time. – But then we cannot separate from this God and his deception. This God leaves us some breathing space, some room for maneuver, some space for us to think for ourselves, because he wants us to grow, to improve, and he grows with us, improves with us – through us.

We are, all of us humans without exception, part of this God. We are really, ultimately, one. The whole cosmos is one, but we and any other intelligent beings that may exist are the most important elements of this one. The one, as I have said again and again, grows with us and through us.


Of course, it is clear that – ultimately – we will have to work with God, no matter how much he has deceived us. We are inalienable parts of him and he is totally in each one of us. We are really one. My contention is only that we have to grow up to be aware of the reality of God – not the fantasy we have believed in for so long. – And the reason we have to grow up this way – with this understanding – is that it is the only way God can continue to evolve – and, indeed, grow himself. As I have insisted many times before: God evolves through us (and any other beings at the highest levels of consciousness) – he grows through us…

Time - an accumulation of memory in universal consciousness, not entropy

Recently I read an article by a scientist who proposed that the "flow" or "arrow" of time is basically the growth of entropy, including decay. When you pour milk into a cup of coffee, for example, it would be extremely difficult to go back and separate the milk from the coffee. The same applies if you try to rebuild an organism that has completely decayed.

I propose a different explanation, though I don't have the scientific knowledge to back it up: the direction of the "flow" of time is determined by the accumulation of memory in universal consciousness. Everything is memory / universally stored information, which keeps increasing with the passage of time and can never decrease (otherwise time would "flow" backwards). Even the mysterious dark energy and dark matter that seem to fill our universe may be a store of memory. We carry the memory of our ancestors within us - even though we are mostly not aware of it. Memory is the imprint that everything leaves on universal consciousness or god (see my posts about god/universal consciousness below). - Unlike the scientist who believes the flow of time is the growth of entropy, I believe that entropy is only something like a side effect - it is inevitable and it always distorts or degrades memory to some extent, but it is not a dominant aspect of reality.

Posted by erwinlux No comments: