The 'evil empire' is in the west 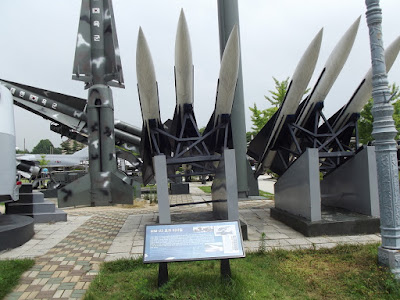 Weapons of war displayed at the War Memorial of Korea in Seoul. Photo 2014.

Diary entry Monday 31 August 2020 (excerpt):
The volume of anti-China and anti-Russia disinformation spread by western media and western governments these days is beyond anything I have seen and heard before – almost unbelievable.
It’s a huge campaign to vilify those countries that don’t toe the capitalist-oligarchist-white supremacist-militarist-fascist-Zionist-Judeo-Christian-centered line.

The USA has truly become a huge criminal enterprise and an “evil empire“ in my view, bombing and occupying other countries, supporting evil regimes like Saudi Arabia, which is destroying Yemen, threatening and coercing others around the globe, strangling nations like Syria, Venezuela, Cuba, Iran and others with sanctions, lying, cheating, stealing, murdering and plundering in so many places, etc.
I am not “anti-American.” I just want to see peace, cooperation and harmony in the world, and in my view it is primarily the USA and Israel who are working against those ideals, even though they pretend otherwise. More than anything I would like to see peaceful cooperation among nations and non-hostile competition. But the USA and its “allies” (lackeys, really), and Zionist Israel go out of their way to destroy any chance of that happening.

They have really been doing this ever since they were created even though they publicly espoused great ideals in which many of their people believed. They were deceived and hijacked from the beginning by selfish, lying, evil people who quickly gained great power.

Today these powerful people cannot bear the fact that the leaders of China, Russia, Iran and others stand in the way of their efforts to gain absolute power over the world. They want to crush them either by inciting revolts in their countries or – if they become desperate enough in case “regime change” attempts meet with no success – by destroying them with military force. They believe they have God on their side, and that God wants them to take control of the whole world.

Our Moon [Unification] movement also wants to take over the world and build what they describe as the “Heavenly Kingdom under God and True Parents.” They focus on winning leaders of countries and powerful people in all spheres of life to their side. In essence they are building an oligarchy that they want to rule the world under the guidance of Rev. Moon’s widow Hak Ja Han and her successors.

But have they built a really peaceful, harmonious, cooperative society on a small scale anywhere? Yes, they get people to cooperate harmoniously (I guess) in order to organize their many spectacular, lavish events such as big rallies and conferences designed to entice world leaders in all fields to join their fold. But I don’t see any real progress at the grassroots level towards building a real harmonious society that could become a model for a future world of peace and love.

Perhaps I don’t know enough about what may have already been achieved or be in the process towards that goal. Until now I have seen no sign at all of the building of an ideal society. It seems the focus is totally on a top-down approach, which in my opinion is doomed to failure because it will almost certainly be hijacked by the most powerful, devious and ultimately selfish people – just like almost any society created by humans before.

I hope I can be proven wrong in this. I do hope so. – Right now it doesn’t look good.

About how my view of the USA changed over time

Why I cannot go back to my previous 'faith'

Diary entry Thursday 3 September 2020 (adapted):
I’m reading an article in Psyche magazine about how to overcome our fear of death.
Do I fear death? In one sense, yes. It’s the fear of the unknown, a natural fear.
But I believe in essence I do not fear death itself – being no more. What I fear far more than anything else is the likely and the possible consequences of my death for those I leave behind – my immediate family. My wife and our children.

How could they cope when I am gone? I worry about that much more than about myself dying. Also, I worry very much that I might become a burden to them if I lose my mind or parts of my body.

This is what I fear and what I worry about much, much more than my own demise. I believe I am now fully reconciled with the idea that I will die. I certainly would not want to live too long – only long enough to be able to take care of my family as much as possible. I do want to leave this existence once I feel I have done my best in this. … And I definitely do not want to exist beyond this earthly life.